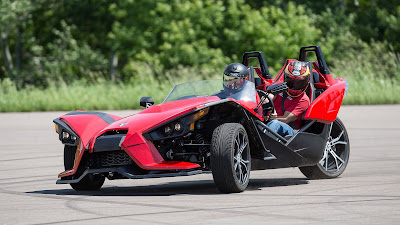 The Polaris Slingshot is a three-wheeled motor vehicle. It was introduced in 2014 as a 2015 model. The Slingshot is manufactured by Polaris Industries, which claims "It's a three-wheeled motorcycle!" It has a tilt-adjustable steering wheel, side-by-side bucket seats, and does not lean. Three-point seat belts are fitted, however it has no airbags or crumple zone, and driver and passenger must wear motorcycle helmets in certain jurisdictions. It has no roof, doors, or side windows. A small windshield is an optional extra on the base model, and fitted as standard on the SL model. The steering wheel, gear stick, and brake, clutch, and throttle pedals have a conventional automobile layout. 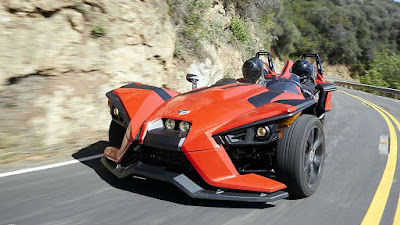 Depending on which state the Slingshot is registered in, it will either be registered as a motorcycle, or as an auto-cycle. Hawaii is the only state still legislating on vehicle classification. The Slingshot weighs 1,743 pounds (791 kg) and is powered by a 2.2 liter inline four engine derived from the GM Ecotec. This engine was formerly used by GM in the Pontiac Solstice and Saturn Sky sports cars. 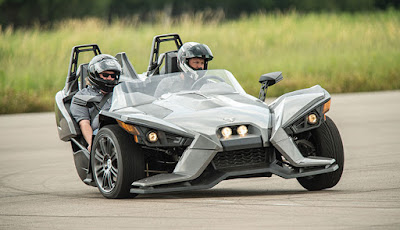 The 2015 Polaris Slingshot has a 2384 cc displacement, with a five-speed manual transmission. The standard Slingshot has two 17" front wheels and a singular 18" wheel in the rear of the vehicle, while the Slingshot SL and SL LE Edition have two 18" forged aluminum front wheels with a 20" rear wheel. All models have a double-wishbone front suspension with a sway bar to control the front end.
at 8/05/2017 06:10:00 AM

Email ThisBlogThis!Share to TwitterShare to FacebookShare to Pinterest
Labels: Automobile